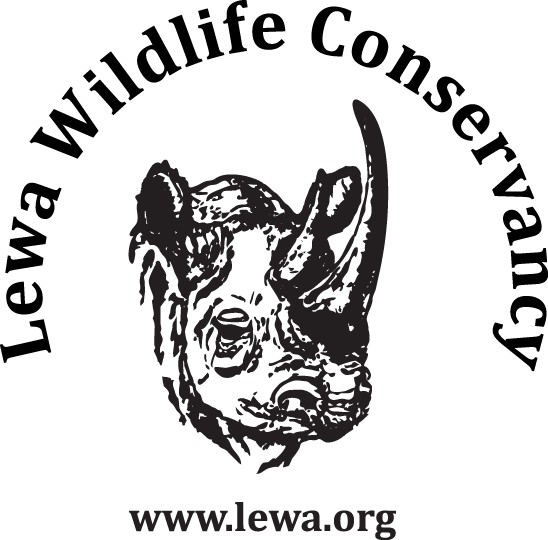 The Lewa Wildlife Conservancy works as a catalyst for the conservation of wildlife and its habitat. It does this through the protection and management of species, the initiation and support of community conservation and development programs, and the education of neighboring areas in the value of wildlife. 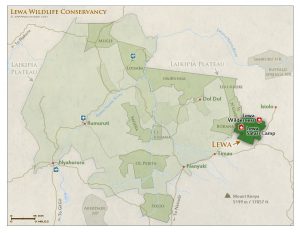 Lewa Wildlife Conservancy was once a cattle ranch. It  now encompasses over 62,000 acres (250 sq. km.). The Craig/Douglas family first came to Lewa in 1922 and managed it as a cattle ranch for over 50 years. Unlike other ranchers in the area, they always valued the wildlife that shared the land and developed wildlife tourism as an additional activity. It was clear by the 1980’s that the black rhino was unlikely to survive in northern Kenya. Poaching had reduced the black rhino’s numbers from an estimated 20,000 animals in the mid-1970’s to a few hundred by 1986. In 1983 the Craigs and Anna Merz – who funded the program – decided to establish the fenced and guarded Ngare Sergoi Rhino Sanctuary at the western end of Lewa. White rhinos were then added to the program after the black rhinos had settled down and established themselves. After ten years, it was clear that the rhinos needed more space, and the sanctuary was expanded to cover the rest of the ranch, and the adjoining Ngare Ndare Forest Reserve.

There is an abundance of wildlife on LWC. Lewa is home to both black and white rhinos and is first and foremost a rhino sanctuary. It is also home to roughly 15% of the world’s population of the endangered Grevy’s zebra. It is also home to over 70 different species of mammals and over 350 different species of birds. Among the types of mammals you will find on Lewa include: African lions, cheetahs, hyenas, leopards, elephants, wild dogs, a large variety of hoofed animals including the rare aquatic antelope, the sitatunga.

Lewa Wildlife Conservancy engages in a very broad-based community development programs. They believe that the key to successful wildlife conservation lies in gaining the support of the local people that live around the Conservancy. With Lewa’s success the communities surrounding Lewa directly benefit. LWC gives back to the communities through their community development programs. They operate three health clinics, support numerous schools, assist with neighboring community conservation schemes, help to develop sustainable water projects, adult literacy programs, and a women’s micro-credit program to name a few.

For more information on Lewa Wildlife Conservancy and its programs please visit their website at www.lewa.org.