The mission of Action For Cheetahs in Kenya is to promote the conservation of cheetahs through research, awareness and community participation in Kenya. ACK works closely with local wildlife authorities and landholders to develop policies and programs that support wildlife conservation and human livelihoods for the long-term development of sustainable human and wildlife zones. 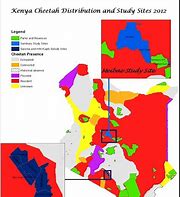 Action for Cheetahs in Kenya is a relatively new not-for-profit entity. It was originally known as the Cheetah Conservation Fund-Kenya and was supported in part by CCF. As the economy took a downturn in 2008, CCF decided that it needed to cut back on its international programs in order to continue to concentrate on its core program in Namibia. Funding was discontinued in to CCF-Kenya in January of 2009 although ACK remains affiliated with CCF as colleagues and advisors in saving Kenya’s cheetahs. Action for Cheetahs in Kenya operates as a partner under the new non-profit organization of Carnivores, Livelihoods, and Landscapes (CaLL). The purpose of CaLL is to link carnivore conservation efforts in Kenya.

In 2018 we will celebrate 17 years of cheetah conservation action in Kenya.  Carnivores, Livelihoods and Landscapes (CaLL) is the registered organization supporting Action for Cheetahs in Kenya (ACK) andthe COOL Crafts project. ACK is guided by a board of directors and a scientific advisory committee while continuing to work closely with local wildlife authorities and land holders to develop policies and programs which support wildlife conservation and human livelihoods for long-term sustainability of human and wildlife zones. ACK researchers work in collaboration with the KWS under a permit through the Ministry of Education, Science and Technology.

Cheetah and Habitat Monitoring in Salama

Research in the Salama region provides an opportunity to identify patterns of cheetah movement in relationship to livestock losses that in turn aids in conflict mitigation. Cheetah monitoring, conflict evaluation and mitigation together with game counts for cheetah prey trend analysis have been the focus of our endeavors at Salama since 2005. Cheetah Field officers collect data on cheetah and wildlife movements in the Salama field site through patrols, walking transects and  KWS “MIST” monitoring (a standardized approach using KWS forms to assist in the monitoring of wildlife while simultaneously analyzing the influence of humans on wildlife habitats).
As part of the student projects, hair catalogues using hairs of potential prey and predator species was prepared and a photo analysis of the same was done to create a reference guide and dichotomous chart for fecal hair identification. A scat washing methodology was adopted for cheetah species identification.

Cheetah and Habitat Monitoring in Samburu
ACK chose the Meibae Conservancy as a base because of the frequency of cheetah sighting reports and began working in this area in 2009. Monitoring patrols, walking transects, non-invasive fecal sampling techniques and radio collaring are among the array of methods ACK uses to map habitat use, analyze cheetah sustainability and determine prey selection. Field officers investigate livestock losses to develop mitigation strategies in this region.In 2014, ACK formalized a long-term commitment to this area and will begin the process of developing a field station in the conservancy in 2015.

Improved Livestock protection
ACK participates in local agriculture shows to share study results and discuss predator loss prevention methods with a greater farming community. Boma designs are presented as miniature models and handouts are given to assist in improved livestock protection. Use of livestock guarding dogs to protect small stock from cheetah attacks and other viable husbandry practices are evaluated and implemented as needed. ACK officers also worked with Green Rural African Development to install a predator deterrent lighting system to prevent predator attacks on livestock holding areas. ACK staff are available to consult with farmers at their homes and to assist in boma construction. A herder certification program is being developed.

Fecal Analysis and Detection Dogs
Cheetah scats (fecal samples) were collected in 2012-2013 as a pilot for non-invasive cheetah monitoring in Salama and Athi-Kapiti. Over 200 scats were collected by researchers, staff and volunteers. We also piloted a detection dog program aimed at increasing our effectiveness in positively identifying cheetah scat. Project results are shared with KWS and communities as a means of understanding cheetah prey selection in community areas. Detection dogs will be used on a national scale once pilot testing is completed in our primary study sites.

National Cheetah Survey
The second national survey is being planned to be launched in 2015 through pilot tests of methods in the Salama, Athi-Kapiti and Samburu area.. A rapid survey will be conducted from 2016-2018 across the entire cheetah range. The survey will evaluate trends in cheetah population using methods of rapid survey through observational and qualitative interview data collection. The data collected during the survey will develop a model for cheetah occupancy and stability to identify critical areas for long-term cheetah conservation strategies.

For more information on Action for Cheetahs in Kenya and its programs please visit their website at www.actionforcheetahs.org.