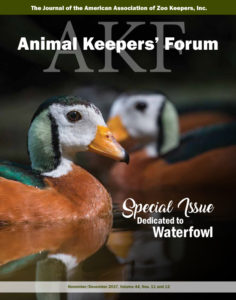 In August of 1972, a short-lived “unofficial” newsletter appeared in the form of The Ruptured Rhino out of Topeka, KS. The intent of this maverick publication was to stimulate the AAZK membership to become more active and participate in the Association at a national level.

The idea for Animal Keepers’ Forum grew out of a bull session among keepers at the Topeka Zoo. The original Ruptured Rhino staff, along with several others, were involved in the conception and production of the first issue of AKF in November of 1974. It was 3 1/2 pages long, and printed on a mimeograph-type machine. Early issues contained zoo news articles, items on legislation and guest editorials.

By June of 1975 the AKF had grown to 13 pages and in November of 1975 celebrated its first anniversary of continuous publication. After the first two issues, it was sold on a subscription basis at $5.00 per year. Although originally the AKF was sold to AAZK members, it didn’t become the “official” professional journal of the Association until March of 1975. The AKF has always carried the motto “Dedicated to Professional Animal Care”.

In January 1976, AKF changed its format to a booklet style publication. In 1977 AKF had its first part-time paid editor and also began to be printed commercially. In 1978 the buff colored cover featuring artwork by keepers debuted. The first Excellence in Journalism Awards were given in 1979.

In 1981 Susan Chan was hired as Managing Editor for Animal Keepers’ Forum. The AKF has continued to grow in scope and content since that time, now averaging 44 pages per issue.  At least once a year, an issue dedicated to a particular species or topic is produced. AKF contains regular columns on Animal Behavior, Enrichment Options, Crisis Management and legislative issues affecting wildlife and zoos. Each issue also contains articles on animal husbandry, book reviews, a listing of upcoming conferences and symposia and Association news.

The Animal Keepers’ Forum has come a long way since its inception when it was printed on a mimeograph machine to today when it is produced with modern desktop publishing computer equipment. It currently reaches approximately 2800 members (including about 150 zoos) in the U.S., Canada and 24 foreign countries.

Animal Keepers’ Forum is celebrating its 40th anniversary of continuous publication this year (2013).

If you are interested in submitting a paper for publication Animal Keepers’ Forum, please view the AKF Submission Guidelines page for guidelines on how to submit your article.

To purchase a hard copy of the Animal Keepers’ Forum publication, please visit our store.